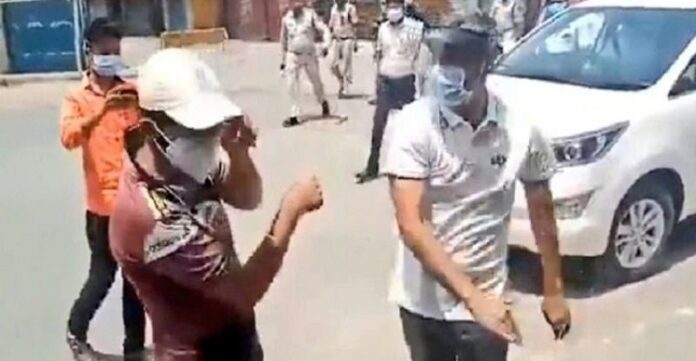 In the Surajpur district of Chhattisgarh, a man who was reportedly going to buy medicines during the ongoing statewide lockdown was slapped by a district collector and later thrashed by cops. On social media, a cellphone video of the incident has gone viral. Cops have also filed a FIR under section 279 of the IPC against the man, Aman Mittal, for riding his motorcycle too fast.

The youth can be seen in the viral video showing officials some identification papers. Ranbir Sharma, the district collector, snatched Gupta’s phone and slapped him. Sharma then requests that he be beaten up by police officers. The man was also accused of filming the incident by the collector. The official can be heard telling cops to file a FIR against the man near the end of the video.

District collector Ranbir Sharma defended himself by claiming that the claims made on social media are completely false. “The person in the video is not a minor, as many social media sites claim. Despite the lockdown imposed on Saturday and Sunday, he was out on the streets riding a sport bike. When police attempted to apprehend him, he attempted to flee by riding his motorcycle at excessive speeds, potentially injuring officers. When questioned about why he was out, the boy gave two different answers. He claimed he had gone to get vaccinated and then claimed his grandmother was in the hospital, according to the Times of India.

The incident occurs just one day after a 17-year-old vegetable seller was allegedly thrashed by cops in Bangarmau, Uttar Pradesh’s Unnao district, for allegedly violating the ongoing corona curfew. Police officers allegedly took the boy into custody and severely assaulted him, according to the victim’s family. Cops took him to Community Health Centre as his condition worsened, where he was pronounced dead, according to his family.

According to US lawmakers, the TRIPS waiver on COVID-19 vaccines is a critical step in...

Actor-politician Khushboo witnesses an accident, shares the image of the car damaged

Sonia Gandhi’s not to celebrate her birthday in the face of farmers’ protests, Covid-19