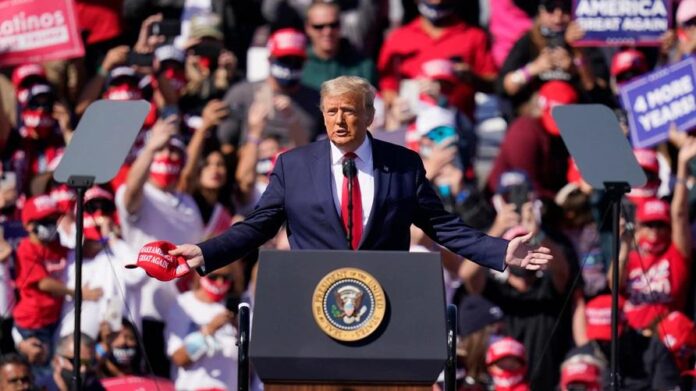 On Wednesday, President Donald Trump held a couple of political rallies in Arizona less than a week before Election Day, amid a U.S. spike in COVID-19 cases day by day and some criticize them that he is giving prioritizes to his re-election over the wellbeing of his voters.

In the days leading up to Tuesday’s contest between Republican Trump and Democratic challenger Joe Biden, the pandemic that has upended life across the United States this year, killing more than 227,000 people and causing millions of job losses, is roaring back.

In national polls, Biden maintains a comfortable lead, showing a public increasingly dismayed by Trump’s poor handling of the biggest public health crisis in living memory in the U.S.

The poll in the field states that are likely to settle on the election is tighter than the nationwide polls.

John Cornelio, the North American Aerospace Defense Command (NORAD) spokesperson, told CNN that an F-16 aircraft had been sent Wednesday afternoon to inspect a small aircraft that had penetrated the air space above the President’s rally.

READ :   US Election 2020 Live updates: Who will be next US president, Joe Biden or Donald Trump

On Wednesday during a voting campaign rally, an aircraft breached prohibited air space over President Donald Trump’s rally in Bullhead City, Arizona, leading to a fighter jet scrambled to intercept it.

During a campaign rally in Goodyear, Arizona, on Wednesday night, President Donald Trump invited its founder, Nigel Farage, to introduce him as “one of the most powerful men in Europe.”

Mr. Farage said to Mr. Trump, “This is the single most resilient and bravest guy I’ve ever met in my life.”

READ :   75 Years of Independence: PM Modi for the inauguration of Amrut Mahotsav, the flag of Dandi March today

Poster of Alia Bhatt as ‘Gangubai Kathiawadi’ for teaser release

Sunny Leone looks black as she shoots for a video, bewitching

Today is Pohela Boishakh 2021, and Google has created a doodle to commemorate it