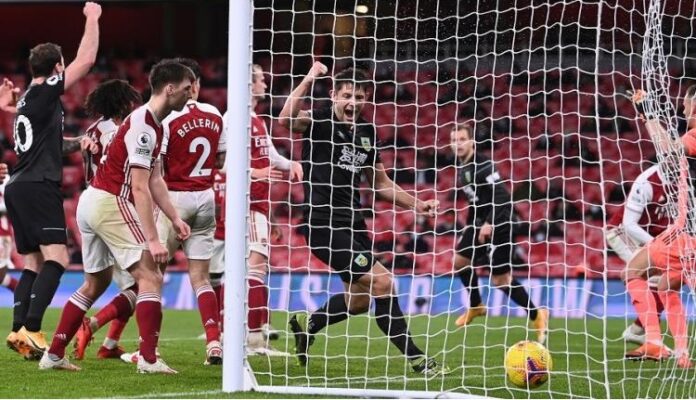 As Captain Pierre-Emerick Aubameyang scored an own-goal and the Gunners were reduced to 10 men in a 1-0 loss to Burnley in the Premier League on Sunday, Arsenal’s season went from poor to dreadful.

At the other end of the field at Emirates Stadium, Aubameyang had been looking to end his goal drought. However the striker, while defending a Burnley corner in the 73rd minute, headed the ball into his own net.

With 2,000 fans allowed under coronavirus restrictions, boos rang out from the home crowd. For the players later, there was some scattered applause.

But with his team 15th in the 20-team division, Arsenal manager Mikel Arteta is under increasing pressure with 13 points from 12 games, four points more than Burnley, who climbed out of the relegation zone.

After Granit Xhaka was sent off for violent conduct in the 58th following a VAR check and a review by the referee on the sidelines, Arsenal was already down a man. After a challenge against another player, Xhaka grabbed Ashley Westwood by the throat and pushed him to the ground.

Arteta said the behaviour of Xhakas was unacceptable, particularly at a time when Arsenal finally gained a foothold in the match.

Arteta said that Hes had clearly made a mistake. We’ve made the match harder and you’re giving the opponents a chance.

After VAR deemed that Mohamed Elneny was not guilty of violent behaviour just before the corner was taken that led to the goal, the Gunners were fortunate not to be down to nine men. Replays showed Elneny appearing to push James Tarkowski’s defender in the face. Instead, he ended up with a yellow card.

Arsenal struggled to break down the resilient defence of Burnley in the first half, and they couldn’t make it count when the Gunners managed to break free.

The home side’s clearest chance came in the 28th when Arsenal carved through Burnley’s defence and went five on three. Kieran Tierney found forward Alexandre Lacazette with a cross from the left-back, whose low shot forced a good save from goalkeeper Nick Pope.

Burnley, taking advantage of a shaky Arsenal backline, also had opportunities to go ahead. In the 13th minute, the biggest moment came when the visitors launched a quick counterattack down the right and Chris Wood headed a diagonal cross just wide of the post.

Overreliance on crosses into the box by Arsenals to create opportunities, many of them poor efforts, has not paid off.

since Nov. 1, when he converted a penalty against Manchester United in a 1-0 win at Old Trafford, Aubameyang hasn’t scored for Arsenal.

At times, Burnley placed Arsenal under pressure with a high press. A nervous home side found it difficult to get through Burnley’s solid team defending.

In the 50th, Arsenal began to take hold of the match and had several chances to score.

But when Xhaka was sent off for violent behaviour, Arsenal quickly surrendered their dominance. Following a challenge on Dwight McNeil, Xhaka was initially shown a yellow card. But the Swiss international was surrounded by other players and replays showed that Xhaka put his hands around Westwood’s throat and pushed him to the ground.

Referee Graham Scott reviewed the incident on a TV screen on the sidelines after VAR looked at the incident, and sent Xhaka off.

As Westwood said after the match, Xhaka fouled Dwight and grabbed him and then put his hands on me and you can’t do that in today’s game.

Arsenal fans will be wondering why in his 25-man Premier League squad, Arteta didn’t name Mesut Ozil as the troubles mounted in the team.

As Xhaka’s red card was the second in four league matches, the discipline of the players has also become a problem. For violent conduct against Leeds, Nicolas Pepe was sent off for a headbutt and the Burnley match was the last of his three-match ban.

Earth Day: The green-blue orb is in peril, but there is reason to be hopeful

Next Year In January, Vladimir Putin will resign as Russian President amid health concerns, Moscow...

Ramadan 2021: Date, significance, and everything you need to know