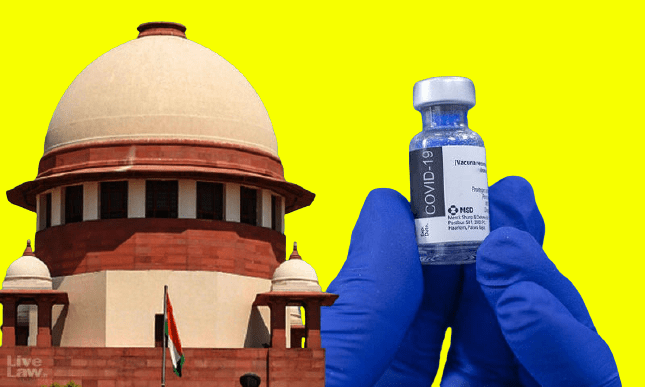 The Supreme Court said today in its detailed order of Monday’s hearing that the Centre’s policy of providing free vaccination to those aged 45 and up while charging those aged 45 and under is “prima facie arbitrary and irrational.” The court also requested that the Centre review its vaccination policy and “place on record a roadmap of projected vaccine availability until 31 December 2021,” citing several other flaws such as vaccine shortages and rural people’s access to vaccines. On June 30, the case will be reheard by the court.

The government has announced that all eligible citizens will be vaccinated by December of this year, an announcement that has been met with scepticism by critics and opposition parties.

The court described vaccination as “absolutely crucial,” noting that people in the 18-44 year age group are currently not only becoming infected, but also suffering from severe infection-related consequences, such as “prolonged hospitalisation and, in unfortunate cases, death.”

The “evolving nature of the pandemic” has necessitated vaccination of this younger age group, “though priority may be maintained between different age groups on a scientific basis,” wrote the bench of Justices DY Chandrachud, LN Rao, and S Ravindra Bhat in their order.

“As a result, given the importance of vaccinating individuals in the 18-44 age group, the Central Government’s policy of conducting free vaccination for groups under the first two phases and replacing it with paid vaccination by State/UT Governments and private hospitals for persons between 18 and 44 years is, prima facie, arbitrary and irrational,” the order stated.

The Centre is paying for people over the age of 45’s vaccines under the “liberalised” vaccine policy that went into effect on May 1. The astates can purchase up to half of their vaccine needs from manufacturers, but at a much higher cost than the Centre. Even more, is paid by private hospitals.

The opposition has been outraged by the disparity, with the Congress demanding “one nation, one price” and accusing the government of “profiteering” from vaccines.

The government has been asked to explain how the 35,000-crore vaccine procurement budget is being spent. “If 35,000 crore has been set aside for vaccine, why can’t it be used to vaccinate people in the 18-44 age group?” the judges have asked, and have demanded that the Centre produce all of its vaccine purchase records to date. The court has requested information on the dates of all vaccine procurement orders, including Covishield, Covaxin, and Sputnik V, as well as the number of doses ordered and the anticipated delivery date .

The court also questioned whether states were willing to vaccinate 18-44-year-olds for free, an issue on which most states have expressed their support.

The Centre has been asked to clarify six points, including child preparedness in the event of a third wave, the number of crematorium workers who have been vaccinated, and a timeline for vaccine availability through December 31.

The Supreme Court, in taking up the case on its own initiative, also refuted the Centre’s argument that the judiciary should stay out of policymaking. The judges wrote, “When executive policies infringe on citizens’ constitutional rights, courts cannot remain silent spectators.”

READ :   PM Modi will conduct an aerial survey of the areas affected by Cyclone Yaas today in Bengal and Odisha

Devutthana Ekadashi: Date, History And Importance of the Day