Mukesh Ambani had a rollercoaster 2020 that created a string of deals for his digital company, went through crazy fluctuations in his wealth, and had his brother’s finances laid bare for the globe to see.

Ambani’s net worth stood at $70.1 billion, up $2 billion today, compared to Buffett who stood at $67.8 billion, according to the latest data.

READ :   Folk singer-actress Paravai Muniyamma passes away at 83 in Madurai

Ambani, 63, is currently the eighth richest person in the world, and according to the ranking that launched in 2012, Buffett is seventh. 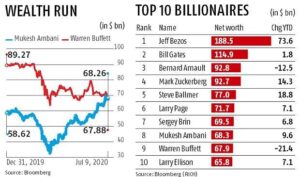 Although the wealth of Ambani has jumped — he is the only Asian tycoon in last month’s club of the world’s top ten wealthiest people. The wealth of Buffett has fallen this week since donating $2.9 billion to charity.

Amazon founder Jeff Bezos is the wealthiest person in the world, with a net worth of $188.2bn.

READ :   Millions of people across China are mourning Yuan Longping, the "Father of Hybrid Rice."

Diwali 2020 | Main things to learn about trading in Muhurat

In Chhattisgarh, a district collector slaps a man for allegedly breaking the lockdown rules

Numaligarh Refinery stake to be sold for Rs 9,876 crore by BPCL