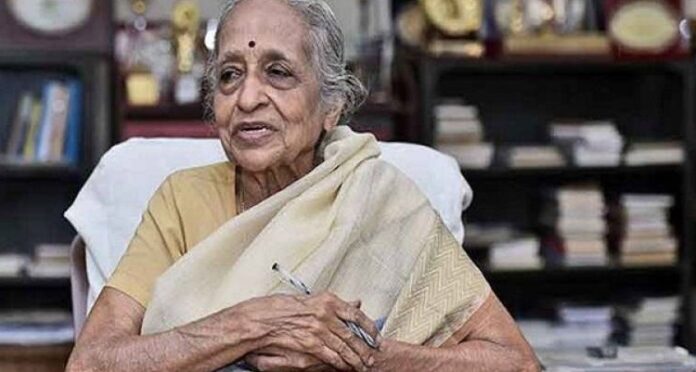 As reported by PTI, renowned oncologist Dr. V Shanta died early on Tuesday morning in Chennai. She was 93.

Late on Monday night, Dr. Shanta complained of chest pain and was taken to the Apollo hospital, The Hindu reported. Doctors said that she had a huge block in her heart that could not be removed. At about 3.55 am, she died.

Dr. V Shanta was best known for her cancer care work. She was the President of the Institute of Adyar Cancer, which she joined in 1954. The institute is known for offering all patients state-of-the-art healthcare.

READ :   Sonia Gandhi's not to celebrate her birthday in the face of farmers' protests, Covid-19

Edappadi K Palaniswami, Chief Minister of Tamil Nadu, said that Dr. Shanta would be cremated with police honours. The chief minister added that it was a way of honouring her selfless service,

Dr. Shanta, born in 1927, completed her MBBS from the Medical College of Madras in 1949. She went on to specialise in obstetrics and gynaecology. She underwent training in advanced cancer care in Toronto and the UK later in the 1960s. Shantha has won a number of awards, including the 1986 Padma Shri Award, the 2005 Magsaysay Award, the 2006 Padma Bhushan, and the 2016 Padma Vibhushan.

READ :   Folk singer-actress Paravai Muniyamma passes away at 83 in Madurai

As soon as the news of her death was reported, tributes and condolence messages started pouring in. Prime Minister Narendra Modi said that he was saddened by the news and that for her “outstanding efforts” to provide quality cancer care, Dr. Shanta will be remembered. Adyar’s Chennai Cancer Institute is at the forefront of serving the poor and downtrodden,” he added in his tweet, “I remember my visit to the Institute in 2018. Saddened by Dr. V Shanta’s demise. Om Shanti. Om Shanti. Saddened by Dr. V Shanta’s demise.

Minister of Finance Nirmala Sitharaman called Dr. Shanta a saint. “Forever in the service of the poor and needy, she lived in a hospital room with a unique mission to cure cancer,” Sitharaman said. “No longer a saint among us.”

Dr. V Shanta will be remembered for her outstanding efforts to ensure top quality cancer care. The Cancer Institute at Adyar, Chennai is at the forefront of serving the poor and downtrodden. I recall my visit to the Institute in 2018. Saddened by Dr. V Shanta’s demise. Om Shanti. pic.twitter.com/lnZKTc5o3d

Dr. V. Shanta, Chairperson of the Adyar Cancer Institute, Chennai passed away early this morning. She will be greatly missed by the cancer care and research community all over the world and the many tens of thousands of lives she has impacted. pic.twitter.com/dNq3iaTGvt

Some of the major impact of late “Dr.V.Shanta” Cancer Institute Chennai in Cancer Care in India include.

Kangana Ranaut sends a powerful message on her 34th birthday: Nobody has the ability to...

PM Modi in Kolkata for the 125th anniversary celebrations of Bose’s birth; to visit Assam...

Johnson & Johnson ordered $120 million to be charged as damages in the case of...