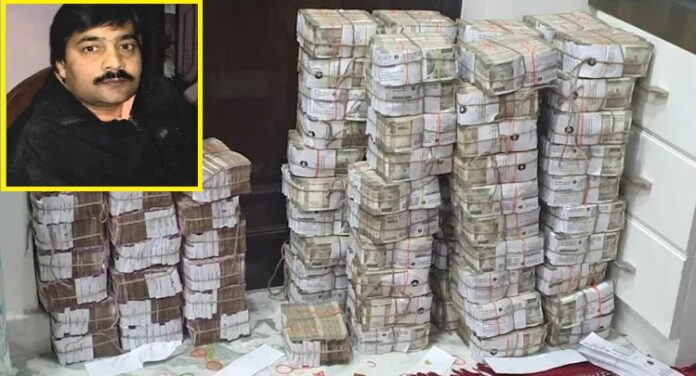 Kanpur/New Delhi: A Kanpur court sentenced businessman Piyush Jain to 14 days in judicial jail on Monday after raids at his home yielded a substantial sum of undeclared money, gold, and sandalwood.

Raids are presently underway at the residence and facilities of Kanpur-based perfume manufacturer Piyush Jain, in what has been dubbed India’s largest tax sweep.

The IT sleuths were able to retrieve an amount of roughly Rs 194.45 crores in cash during searches at Odochem Industries’ residential/factory premises in Kannauj, according to the DGGI.

In addition, about 23 kilograms of gold and vast amounts of unaccounted raw materials used in the manufacture of perfumery compounds, including over 600 kilograms of sandalwood oil stored in underground storage with a market worth of nearly Rs. 6 crores, have been recovered,” the DGGI noted.

Because the gold discovered from Jain’s premises had foreign markings, the Directorate of Revenue Intelligence (DRI) has been called in to conduct the requisite investigations, according to the DGGI.

According to the DGGI, Jain, who is also the promotor of Odochem Industries, has accepted that the cash confiscated from the residential premises is related to the sale of items without paying GST. “In light of the substantial evidence on record demonstrating large-scale GST avoidance by Odochem Industries, Kannauj,” the statement continued.

Earlier in the day, Piyush Jain was arrested by the Directorate General of GST Intelligence (DGGI) in Ahmedabad under Section 67 of the CGST Act. Jain’s factory and apartment were also raided for an additional Rs 10 crore.

Piyush Jain has also named others whose names have yet to be revealed, according to Times Now. According to insiders, Jain claims the funds are from the sale of his family’s ancestral jewelry and has asked the agencies to deduct income tax and refund the funds.

Going forward, the multi-agency investigation could include the Enforcement Directorate (ED), which will look into the perfume businessman’s connections to other people as well as his financial sources.

Meanwhile, a political fight over the recovery of cash from a Kanpur businessman has erupted in poll-bound Uttar Pradesh.

Jain reportedly received ‘patronage’ from the Samajwadi Party, according to the BJP. The SP has retaliated, claiming that the recovery of large sums of money from Jain demonstrates the failure of demonetization.

Dhaakad: Bruised Kangan Ranaut says ‘bring it on’ even after a 14-hour shift

Bollywood Stars Pic: How looks Janhvi Kapoor, Katrina Kaif, Ananya Panday and others in their...

Corona vaccination for 15-18 years: Only Covaxin is likely to be used

Bihar Board Class 10 Exam 2021: Social Science Exam cancelled due to leakage of paper,...