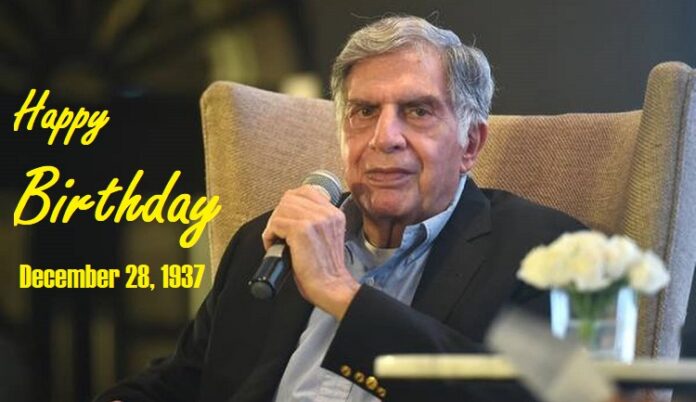 Ratan Tata, the world’s most well-known industrialist, celebrates his 84th birthday today. Ratan Tata is well-known not just for his achievements in the industry, but also for his distinct personality.

Ratan Tata is now regarded as a role model for many individuals.

It should be remembered that Tata was born on December 28, 1937, in Surat, India. Ratan Tata is the son of Naval Tata, whom Navajbai Tata adopted when her husband Ratanji Tata died.

Ratan Tata received his early schooling at Mumbai’s Campion School and completed his secondary studies at the cathedral. He went on to John Kennon College for his BSc in Architecture.

Then, in 1962, he earned a bachelor’s degree in communication engineering from Cornell University and a master’s degree in advanced management from Harvard Business School in 1975.

In 2008, Ratan Tata, the former chairman of Tata Sons, was awarded with Padma Vibhushan, and in 2000 with Padma Bhushan. Ratan Tata is well-known for his role in propelling the Tata firm to new heights under his leadership. According to statistics, the Tata Group increased sales by more than 40 times and profit by more than 50 times under his tenure.

READ :   Hina Khan looks stunning in a pink lehenga and performs a dance to the song "Oh Meri Laila"

Ratan Tata’s family has always been interested in social functions, as seen by their active participation in social activities. Ratan Tata is known for consistently assisting the underprivileged and needy. He gave a substantial amount of 500 crores to the PM Cares Fund during the Corona epidemic, and he also actively participates in various charitable work.

1. Don’t believe in making the best choices. I make choices and then correct them.

READ :   KL Rahul shares the reported 'happy' photo of GF Athiya Shetty with her birthday cake & it's all interesting stuff

2. The stones thrown at you by others. Make memorials out of them.

3. Someone who imitates others can be successful for a limited period of time. However, one cannot make significant advancement in life.

5. There are a lot of things I would change if I had another chance to live, but I don’t want to look back and see what I couldn’t do.

Sushmita Sen praises her daughter Alisah’s ‘wisdom and grace’ in sharing a heartwarming video about...

What happened in China that led to the infections of thousands with Brucellosis disease?